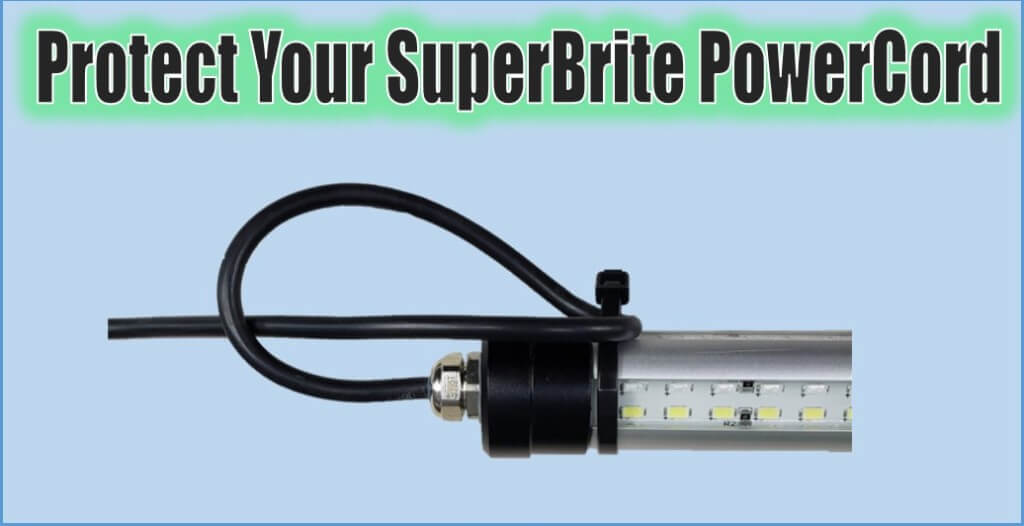 Tips that will Help Protect Your Lights Power-cord

The wire breaking in the power-cord where it enters the top of the most fishing lights is a problem we have been trying to resolve for many years, but unfortunately, the solution isn’t an easy one.  Different types of built in strain-reliefs do help, but they can also cause problems of their own.  The problem is worsened when fishing in water that has fast running currents because the light is constantly being pulled and moved from side to side in the fast moving water.  The longer and heavier the light is, the worse the problem becomes.

First, copper wire simply isn’t made as well as it once was and it no longer has the tinsel strength it once did.  Most copper wire companies now mix more tin and other alloys in with the copper which has kept the prices somewhat affordable, but has also made power-cords weaker and less conductive.  Since we purchase our power-cords from other manufacturers, we depend on them to supply us with quality material that not only has good conductivity, but is also strong.

When designing an underwater light, the first thing that must be addressed is how to make the light watertight.  The stainless steel strain-relief we use on our AlumiGlo SuperBrite lights not only prevent the power-cord from pulling out of the light, but also prevents water from leaking into the light where the power-cord enters the light.  While the strain relief does prevent the cord from pulling out of the light and prevents water intrusion from around the cord, it also creates a pinch point in the wire where which can allow the wire conductors to break if the cord is bent back and forth over and over again.  It’s much like holding one end of a wire with a pair of pliers and then bending the opposite end back and forth until the wire breaks.

The wire conductors themselves are pretty strong and typically do not break by simply pulling the light in and out of the water.  Wire breaks over a period of time when it is bent back and forth in opposite directions.

Typically, we have found 2 primary causes for the power-cords breaking

Using the above strain-relief technique and storing your your lights correctly will help prevent damage to your fishing lights power-cord.